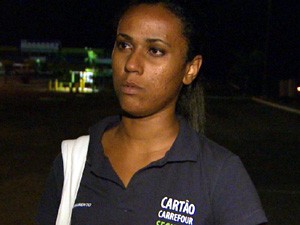 Case occurred on Thursday, September 6th in the Carrefour supermarket of Campinas, SP. Jéssica Barros said she was called a ‘monkey’ during discussion.
A Carrefour supermarket employee accused a customer of assaulting and offending her with racist words on the evening of Thursday (6), in Campinas (state of São Paulo). Jéssica Barros works in the card sector industry and having told a customer that there were debts that were not paid on the man’s card, the two began to argue. “He started calling me monkey. When I said I was going to call the police and put the phone to my ear, he approached me and slapped me in the face”, she said. Barros also revealed that the customer snatched the phone from her ear.

Jéssica Barros: Customer called her ‘monkey’, slapped her and snatched phone from her
The cameraman Tiago Martins, another customer of the establishment, said he witnessed the attacks and prevented the man from assaulting Barros any further. “By the time he was on top of her, everybody was on him.”
Another employee at the grocery store, the clerk Daniele Cristina Pereira, also said he saw the moment when the customer yelled racist insults at Jessica. “I saw him calling her a monkey. This is absurd, a lack of respect”, he said.

Customer accused of assaulting Carrefour employee
The Military Police went to the supermarket and arrested the man in the act. He was taken to the 1st Precinct, where he testified and paid a R$700 (around $300) bail. The accused will respond to the crime of libel in freedom.

Accused remained silent when questioned about incident by the press
In a statement, Carrefour said it strongly condemns any kind of discrimination or disrespect, and that as soon as they became aware of the incident, summoned the police to handle the situation and accompanied Jessica to register the police report. The supermarket also said it make itself completely available to authorities to cooperate with the procedures involving the occurrence and give the necessary support to the employee.
Source: G1

Like Loading...
About Marques Travae 3722 Articles
Marques Travae. For more on the creator and editor of BLACK WOMEN OF BRAZIL, see the interview here.

This site uses Akismet to reduce spam. Learn how your comment data is processed.

Meet WD, the singer with the soaring voice who became a favorite after singing ‘Eu Sou’, his song about resistance, race and prejudice on ‘The Voice Brasil’

The first conductor hired by a recording company in Brazil, musician Pixinguinha (1897-1973) created arrangements for the ‘golden era’ of Brazilian Popular Music

After two year delay, film ‘Marighella’, about the Brazilian revolutionary, debuts in Brazil; learn a few facts about the movie and the man

Rapper/singer Lizzo reveals her favorite Brazilian song is by Os Tincoãs, a group whose music is rooted in Afro-Brazilian religion Candomblé